Now that there is a hint of war in the air again, Pentagon contractors in the iShares Aerospace/Defense (ITA) exchange traded fund are roaring back. If it weren’t for the persistent weakness of Boeing (BA), in fact, that fund — which performed so well last year — might be back at highs.

It had been worrisome that the jet-fighter, aircraft carrier and ammo makers were lollygagging earlier in the summer despite war drums beating. The lack of response by Lockheed Martin (LMT), General Dynamics (GD), Raytheon (RTN) and Northrop Grumman (NOC) gave the appearance of a group that had been abandoned by bulls. 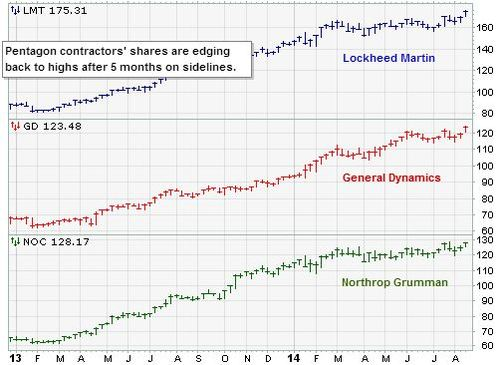 Now the world of warcraft is back in gear, so we can breathe a sigh of relief. The cavalry is here. Not saying that’s a good thing on a moral ground, but it makes me feel better as an investor. They are all fairly cheap, and tend to do well at this time of year anyway. GD and LMT are the leaders; RTN is the laggard with the most catch-up to do; NOC is in the middle, and should follow its peers to new highs soon.