Crude oil fell another 3.5% on Wednesday, matching the lows set earlier this month, and churning up a total slopstorm for the big energy producers. The fossil fuel economy appears to be vaporizing before our eyes.  It was a bad day for the likes of ExxonMobil (XOM), Chevron (CVX) and ConocoPhillips (COP), as they all retreated to two-year lows and look like death on a stick.

Fun fact: Apple rose 5.7% today while Exxon fell 3.3%. Apple is now the largest company on Wall Street with a market capitalization of $671 billion, while the second largest is Exxon at $372 billion. It’s kind of mind-blowing to see size champ Apple has an 80% advantage on its runner-up!

The next largest companies, in case you were wondering, are Google (GOOGL) at $347 billion, Microsoft (MSFT) at $339 billion after losing 13% in the past two days, Johnson & Johnson (JNJ) at $284 billion, Wal-Mart Stores (WMT) at $279 billion and Wells Fargo (WFC) at $269 billion. One-time leader General Electric (GE) is at $239 billion. Cisco Systems (CSCO), which was the board leader in 2000 at the height of the Nasdaq bubble and seemingly bound to be the first trillion-dollar company, has fallen to $137 billion. The youngest company on the top 20 list is Facebook (FB) at $212 billion.

The fall of the energy companies is quite remarkable, as they used to rule the roost. Chevron is down to $196 billion, Royal Dutch Shell (RDS) is $212 billion, ConocoPhillips is $77 billion and Occidental (OXY) is $59 billion. 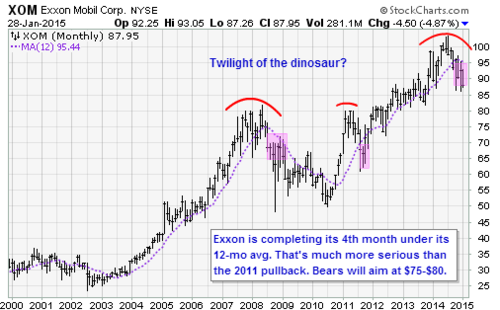 These large integrated energy producers are faced with a huge problem. About 80% of the oil in the world is produced by state-run entities in Saudi Arabia, Russia and Iran while only 20% is in private hands. The independent companies like Exxon have no real control over the price of their product, unlike say Microsoft or Google, which can raise prices of their services if they choose. And yet they have a competitor, mainly Saudi Aramco, which can flood and disrupt the market for long periods of time to gain market share and force their competitors into dire financial straits.

Even at $60/barrel oil, a company like Exxon cannot realistically bid for new leases in the Arctic or in deep-sea fields off the African or South American coastlines. At $40/barrel it would be impossible to make expensive exploration and development work. At $20 to $30/barrel it would be insane. In short, adding to its reserves in a meaningful way for long-term growth is about to come to a screeching halt.

And yet Aramco has the capacity, and apparently the will, to take prices down to the $20-$40/barrel level for as long as two years, according to energy analysts, in a ruthless bid to drive its competitors out of business and seriously destabilize the petro-economies of arch-enemies Russia and Iran, not to mention the anti-establishment ISIS gang, whose caliphate financing stems from selling stolen oil.

Can you imagine a world in which Exxon, Chevron and Conoco — and in turn oil services providers like Halliburton (HAL), Schlumberger (SLB) and Baker Hughes (BHI) — are ruined as completely as if they were nothing but dot-coms who were slaughtered and filed in the tech bust of the early 2000s? Their staffing and cost structures are designed for oil at $60 to $85 minimum. This could happen if the Saudis consider it in their best interest, so you better put it on your list of things to worry about this year.