Some good earnings news emerged Wednesday from fallen dot-com star AOL (AOL), which reported a top- and bottom-line beat for Q2 as well as announced a $150 million buyback program thanks to a 20% increase in ad revenue. Shares gained nearly 8% as a result.

Before Amazon.com, before Yahoo!, before Google, before even the term “dot-com” was invented, there was AOL, sending out tens of millions of CDs in the first viral marketing campaign to get Americans hooked up to its white-washed version of what we now know as the Internet. Many readers may be too young to remember, but AOL literally was the Internet for most tech-savvy people in the mid-1990s, though now we would probably call its service an app. 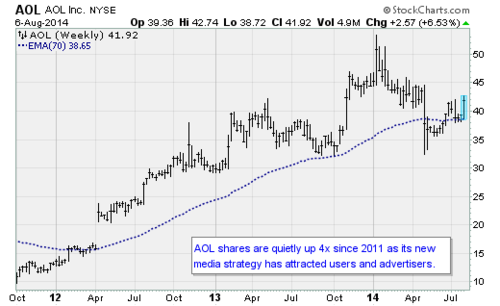 It was responsible for an amazing number of innovations that linger to this day, including the first mass-market consumer email (“You’ve got mail!”); instant messaging (AIM); and stock market blogs and discussion boards (Motley Fool). AOL.com shares were one of the top three gainers of the 1990s, up more than 50,000% in ten years, surpassed only by the likes of EMC (EMC) and the now private Dell Computer.

The AOL brand was ruined after its merger with Time-Warner in one of the most disastrous, value-destroying M&A deals of all time, but after about a decade in the doghouse it appears to be getting back on track as an independent entity, headlined by its Huffington Post unit. AOL is still as cheesy as ever, but I think we like it that way. Good to see this pioneer enjoying success again.