Apple (AAPL) is completing its journey from renegade to matron with the announcement that it would be joining the Dow Jones   Industrial Average, effective  March 19 taking the place of old Ma Bell, AT&T (T).

The move was prompted by a 4:1 stock split by Visa (V) which would have reduced the weighting of information technology in the price-weighted index. The addition of Apple is designed to minimize this impact while allowing telecoms to be represented by the continuing exposure to Verizon (VZ).

It's hard not to see this as a play by the index committee at S&P Dow Jones to vamp up the storied measure of the stock market in light of the Apple-fueled blitz back to dot-com highs by the Nasdaq Composite -- with a top tick above the 5,000 level earlier this week. David Blitzer, managing director and chairman of the index committee, confirmed what was rumored to happen since last April when Apple announced a 7:1 split.

Historically, the managers of the Dow have done a pretty terrible job selecting tech stocks.

To be fair, the stocks they added at the time performed pretty well, with Nike (NKE) and Visa (V) both gaining about 40% or so. But the ones they dumped did better.

It's also interesting to note that this isn't the first time the Dow has mugged AT&T. It was originally added on March 4, 1939, replacing IBM (IBM) and Nash Motors, famous for the Nash-Healey sports car and eventually rolled into American Motors upon the acquisition of the Hudson Motor Co. before the nameplate was phased out by George Romney, the father of Mitt Romney.

AT&T was also dropped on April 8, 2004 (along with Eastman Kodak and International Paper (IP)) in favor of AIG (AIG), Verizon, and Pfizer (PFE).

The new AT&T traces its lineage to SBC Communications (one of the "Baby Bells"), which renamed itself AT&T after buying the original AT&T (or "Ma Bell") in 2005. SBC was added to the Dow on November 1, 1999.

The move has its defenders. the Wall Street Journal noted that technology is still underrepresented in the index with just four true tech companies -- Cisco (CSCO), IBM (IBM), Intel (INTC), and Microsoft (MSFT) -- comprising a 10% weighting vs. a 20% weighting in the S&P 500. And the National Science Foundation estimated that "knowledge and technology intensive" industries were responsible for 40% of U.S. GDP.

Apple's management were surely cognizant of all this when they announced the stock split. By doing so, they pretty much ensured Apple would be added to the Dow 30 to the benefit of existing shareholders, who gain from the added buying demand that will now flow in from passive, index-focused investors. Other large-cap tech alternatives, such as Google (GOOG) and Amazon (AMZN) have share prices that are too high and would've skewed the price-weighted Dow.

Along with the recent floating of a bond denominated in Swiss francs, Apple's been in the headlines thanks to some savvy financial engineering.

Later this month, attention will turn back to the company's ability to grow earnings by selling new gotta-have-it devices when it releases the Apple Watch. My skepticism on the Apple Watch specifically and smart watches in general is well documented. This could very well be the company's first high-profile flop in a long time.

Bespoke Market Intelligence notes that buzz has quickly died down already. Those in the $200k+ income category were the most likely to buy an Apple Watch, but have clearly lost interest in recent months. 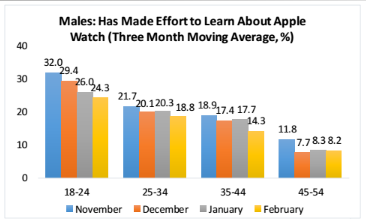 Demographics aren't looking good either with women the primary user of iPhones (53% of total) vs. men (47% of total) yet women have been much less interested in the Apple Watch than men are. And the interest level among men has been dropping rapidly, falling by two-thirds among 18-to-24 year old men since November.

Disappointment with the Apple Watch could mesh up with what market history suggests should be a rocky road for the stock going forward. An analysis of data by Bespoke shows that of the stocks added to the Dow since 1999, on the median they have lost 5.1% over the next three months and managed a feeble 0.9% rise one year out. 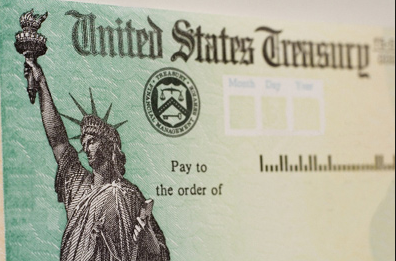