One of our core technology obsessions is the rapid development of automated transportation systems -- specifically self-driving or semi-autonomous automobiles.

The big players are generating a lot of attention in this area, from the goofy Google(GOOG) cars to the "autopilot" software update by Tesla (TSLA) to the "Project Titan" initiative over at Apple (AAPL).

Mobile vision capture and processing company Mobileye NV (MBLY) has been profiled in our Tech Trend Trader letter, and it's one of my favorite ideas right now. Based in Israel, Mobileye provides the "eyes" and the "brains" needed for vehicles to assist drivers and help them stay within their lanes, maintain a safe following distance on the freeway, avoid pedestrians, and avoid rear ending someone. 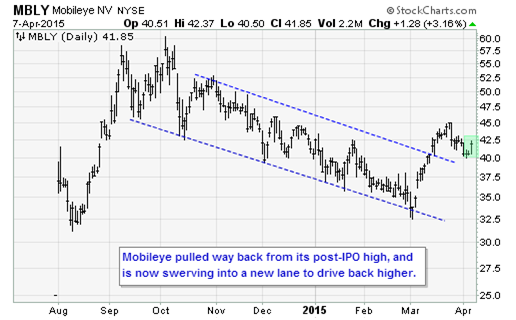 Eventually, these sensors and processing systems will enable full hands-free driving of the type that, until now, has been relegated to science fiction fantasies (such as car chase scene featuring Will Smith in I Robot).

The first step is getting making driver assistance systems ubiquitous, perfecting the technology and driving down the cost of the components via economies of scale. That's starting to happen now.

Credit Suisse analysts led by Dan Galves highlighted in a note to clients late last week a new initiative by Toyota Motors (TM) to make its active safety systems available on all its vehicles by 2017 at a low incremental cost.

Galves has been arguing that Japanese manufacturers would do this to gain a competitive advantage over rivals by taking advantage of cost savings from the weaker yen to add new features to its cars without meaningful increases in price to the end consumer. Now, it's starting to happen.

The technologies to be added to Toyota and Lexus models include a suite of active safety systems including forward collision warning, lane departure warnings, automatic emergency braking, and auto high-beam. Larger models will also get pedestrian detection and adaptive cruise control.

What's unique is that Toyota will make this suite available on all its trim levels; normally, one must first buy the highest trim level before even being able to check the options box on active safety systems.

As a result, for eight vehicles sampled, Galves found that the price difference between a base-priced vehicle and one equipped with active safety systems was between $6,500 and $10,000.

He believes this move will be a negative for vehicle manufacturers like Ford (F) since it will pressure margins. But it will be a positive for suppliers like MBLY as these technologies become commonplace and start savings lives -- making it hard for new car buyers to turn these systems down.

Another way to view this is the way personal computers first got their start in offices before people wanted them at home, or the way Apple got people hooked on their hardware/software synergies with iPhones and Macs before convincing people to buy an iPad. Once semi-autonomous systems become more familiar and maybe even indispensable, the transition to fully autonomous vehicles will be easier. This is coming much faster than most people think. Take me home, robot.