Analysts at TIS Group reported this week on an IMS Healthcare Institute report on global trends in cancer treatment that was pretty fascinating and had major investment takeaways. I want to share it with you now. The following all comes from the TIS assessment of the IMS report:

In 2014, global spending on oncology, or cancer drugs rose 10.3% year-on-year to $100 billion, under\scoring that a number of new, first in class treatments have entered the oncology market. Many of the new treatments were directed to tumors types that have historically had poor prognoses and low survival rates.

Accelerating growth in oncology spending is counter to total drug spending which has increased only modestly in recent years. In effect what is happening in cancer research is that the sharp increase in new medical entities peaking in 2015 through 2016 will become a foundation for the next “wave-like” generation of oncology therapeutics that is expected to peak in 2020.

3. Effective therapies are coming from new and older drugs

As each wave crests, various clinical parameters are discovered and new, effective combination therapies are formulated from the inventory of new drugs and older drugs. This clinical scenario represents a cyclic R&D flow in which new therapeutics enter the market at roughly the same time constituting a wave and each wave of new therapies builds on the last wave to increase clinical drug efficacy and patient survival. 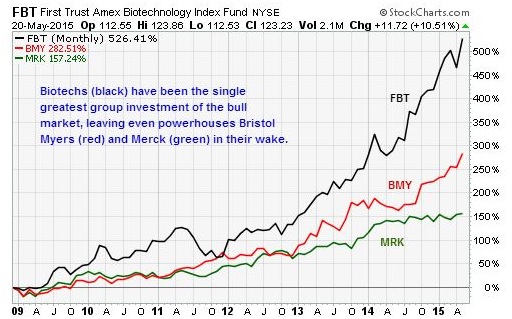 IMS Health believes that the most pronounced benefits in treatment will come from combination therapies rather that specific, mono-drug regimen therapies. This emphasizes that in each cancer patient, the respective cancer is a dynamic, moving therapeutic target. Many new drugs that are initially effective for a period of months lose efficacy as cancer cells acquire new phenotypic traits.

5. The best combination therapies attack multiple aspects of the cancer

This ever changing clinical manifestation of the disease necessitates that treatments be continuously monitored and changes in drug therapy be made quickly in response to changes in the cancer being treated. Combination therapies that simultaneously attack multiple aspects of the cancer are therefore often much better at arresting the disease than mono-drug regimen therapies.

6. Many drug companies are likely to benefit from combination therapies

IMS anticipates that emergent combination therapies will be derived from new medical entities and existing medical entities and cross several different drug manufacturer’s products. Firms with the largest inventory of launched oncology drugs and best oncology pipelines stand to benefit the most.

7. Biggest winners may be Roche, Bristol Myers and Novartis

TIS Group believes that the evolution of combination therapies will favor Roche (ticker: ROG on the Swiss stock exchange) which has a substantial oncology drug inventory as well as Merck (MRK), Bristol Myers (BMY) and Novartis (NVS) over other large pharmaceutical with limited oncology offering and small biotechs that have only one or several offerings.

Moreover, few pharmaceuticals are actually dedicating R&D efforts to discover and develop combination therapies as a novel, new medical entity. TIS believe that Roche and Bristol Myers Squibb are well positioned in this space as are AstraZeneca (AZN). The analysts also note that new chemical entities that enter the clinic with companion biomarkers will be emphasized over non-biomarker drug entities.

9. Drugs with companion biomarkers fared much better in clinical trials

Mounting evidence shows drugs entering clinical trials with companion biomarkers lowered risk of trial failure and a significantly higher probability of successfully transitioning to the next trial phase than those drugs not supported by a companion biomarker. In addition, when a new medical entity supported by a validated biomarker is launched, monitoring and establishing the efficacy of treatment in specific patients is enhanced.

10. The market was $32 billion in the United States alone

They go on to observe that in the United States alone, roughly $32 billion was spent on oncology drugs in 2014. Of that amount, around $23 billion was spent on new generation, target therapies, compared to $6.5 billion for cytotoxic agents and $2.9 billion for hormonal therapies. This represented the highest spending of any disease and a per capita spending on therapeutic oncology drugs of $99 against $71 in 2010.

TIS expects that aggregate health care spending for oncology therapeutics will continue to increase and new, target therapies represented by branded drugs and branded drug combination therapies will lead other categories by a wide margin.