While specific areas of the market are rising with a certain lightness that reminds us that while the economy may be struggling in certain areas -- like shale-oil communities, for instance -- there are other areas that are prospering. Homebuilders are one such area. 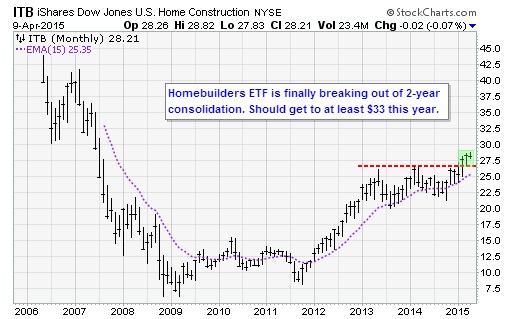 1. Homebuilders as a Group Are Moving Free of a Large Base Pattern

True, they have been a bit weaker recently, but the iShares Dow Jones U.S. Home Construction ETF (ITB), above, recently notched a new 7-year high as sentiment on the housing sector warms along with the arrival of spring. Toll Brothers (TOL), which was in our StrataGem list in March, is riding the wave higher. TOL tested above the $40 level this month, kicking above resistance from 2013 and 2014, to hit levels not seen since 2005, shortly before traders abandoned the stock as the air came out of the housing bubble.

This new upward excursion for the industry group breaks a funk going back to 2013, which coincides with a slowdown in the pace of home-price gains, according to the S&P/Case-Shiller Home Price Index.

2. Housing Demand is On the Mend

Although housing starts have been soft -- as it's hard to build when there's snow on the ground -- housing sales (both new and existing) have recently rebounded, to the surprise of many. Demand must indeed be strong if buyers are willing to trudge through the ice and slush to attend open houses and make offers. 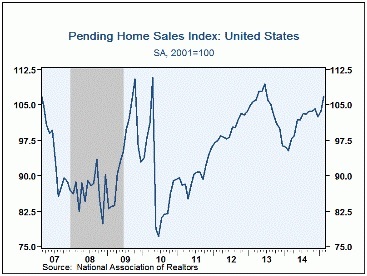 As a result of the recent sharp increase in demand, shown on the far right in the chart above, and the stagnation of supply, the inventory of homes for sale is tightening again -- which will be a boon to home prices. Paradoxically, rising prices for houses will attract more buyers who are on the fence at this time. For the first time since 2013, there are less than five months of supply on the market at the current sales rate.

3. Kids Are Finally Ready to Move Out of Mom’s Basement

Another dynamic at work is that millennials and other youngsters -- many of whom are college-educated but saddled by debts -- are preparing to move out of mom's house, according to new research by UBS. The household formation rate is bumping up. Survey results show that a majority currently living with relatives and friends are now looking to rent or buy their own place within the next 12 months.

Adding color to the thesis that the housing market could be on the cusp of a turnaround were comments from Hovnanian (HOV) management in mid-March that it's preparing for a breakout year in 2016, with much higher profitability. KB Home (KBH) management expects a strong second half of the year featuring accelerated revenue and earnings growth, citing a jump in traffic, improving housing fundamentals and solid demand at the start of the spring selling season.

5. Wall Street Analysts are Raising Estimates for the First Time in Years

Deutsche Bank raised its price target on Toll Brothers in March, noting that the company's orders for February were up 13% year-over-year despite challenging winter weather in half of its selling markets. I will see if our ETF model recommends ITB when it runs over the weekend, and let you know on Sunday or Monday.