The slowdown in retail sales growth has been a big surprise this spring, as lower gasoline pump prices were expected to boost spending. What's going on?

Our new friends at TIS Group have a fascinating if scary answer: The credit cycle is breaking down as consumers sense that the economy is slipping a gear and don't want to over-leverage themselves.

This is important because the world is not on a typical boom-and-bust business cycle. With central banks driving much of the action, the world is instead on a credit cycle, which according to TIS means that everything depends on the availability and price of credit.

With the Fed threatening to raise rates despite a disinflationary environment, credit conditions are changing in the United States as well as in other developed countries. 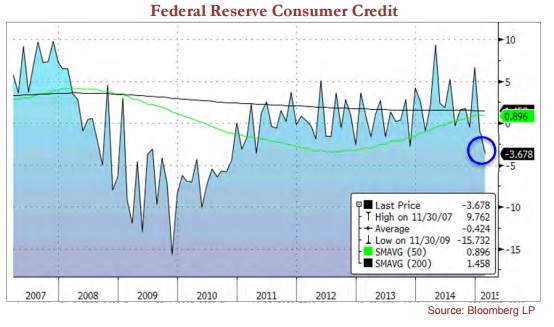 The chart above, provided by TIS, shows that according to Federal Reserve data, Consumer Credit Revolving fell by 3.6 in February 2015. The analysts note you have to go back to mid-2010 and then to the dark days of the first quarter of 2009 to see readings as weak. In its commentary, the Fed has focused on consumers' unwillingness to charge purchases.

This is not about the weather, it is about consumers' view of the future of their jobs and wages. It can be seen as a warning that consumers are reining in their purchases and not using their windfall from lower gasoline prices in the expected way.

It gets worse. The National Association of Credit Managers produces a monthly report on credit conditions, and the March edition, which you can read here -- and you should read it -- paints an incredibly gloomy picture of current credit stresses. 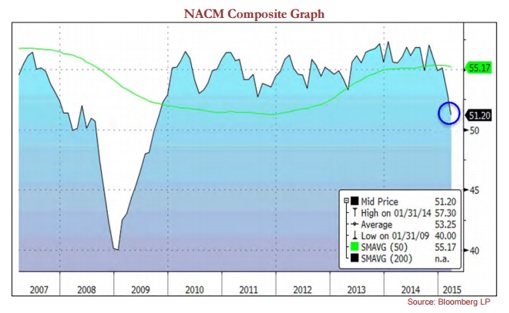 This chart above shows the NACM Index Composite and appears to show a problem is developing in the credit system. This is how NACM described it in the March blog:

"We now know the readings of last month were not a fluke or some temporary aberration that could be marked off as something related to the weather. There is quite obviously some serious financial stress manifesting in the data and this does not bode well for growth of the economy going forward. These readings are as low as they have been since the recession started and to see everything start to get back on track would take a substantial reversal at this stage. The data from the CMI is not the only place where this distress is showing up, but thus far, it may be the most profound."

Looking at sub-indexes of the composite, the Service sector's unfavorable conditions have generated a reading at 48, which signals contraction. Manufacturing unfavorable were also below 50, at a 48.9 reading. So the consumer’s willingness and ability to borrow is deteriorating. and companies are also experiencing more difficulty accessing credit, the analysts observe.

This begs the big question: Why is this happening?

We need to dig deeper, and look at another NACM gauge called the Rejection of Credit Applications Index. The TIS analysts call it "a real stunner," and it sure is. Broken down by service and manufacturing sectors, the service reading is at 42, worse than it was during the September 2008 crash. The manufacturing reading is 43.8, also below September 2008 levels. In fact, the March calculation is the largest increase in rejections of applications for credit on record.

TIS goes on to conclude that "this is what a burgeoning credit crunch looks like." Based on this data, the notion that the Fed is even thinking about raising the price of credit -- at a time it is already hard to come by -- seems crazy and impossible. It might even be fair to expect the Fed would want to ease credit amid such conditions.

This is a very out of consensus idea, and may help explain why MacroSwitch has been so persistently negative since February, and why the stock market is so stuck. It may also turn out to be the most important analysis we've presented this year.