In my five and a half decades of life on Earth, the most profound technology changes have been personal computing, digital networking and the rise of mobile communications.

I suspect that one of the biggest technology changes coming for children born right now will be in energy and transportation, as solar power eclipses fossil fuels and the autonomous car eclipses personal driving.

We've already talked a lot about solar energy, so let's take a moment to consider changes coming to driveways, highways and parking lots near you. I'm going to lean heavily on the research of Barclays analyst Brian Johnson as reported in Bloomberg on Tuesday

The article by Keith Naughton, quoting the Barclays report, noted the following:

-- U.S. auto sales may drop about 40% in the next 25 years because of shared driverless cars, forcing mass-market producers such as General Motors Co. and Ford Motor Co. to slash output.

-- Vehicle ownership rates may fall by almost half as families move to having just one car. Driverless cars will travel twice as many miles as current autos because they will transport each family member during the day.

-- Large-volume automakers will need to shrink dramatically to survive. "GM and Ford would need to reduce North American production by up to 68% and 58% respectively," Johnson wrote. 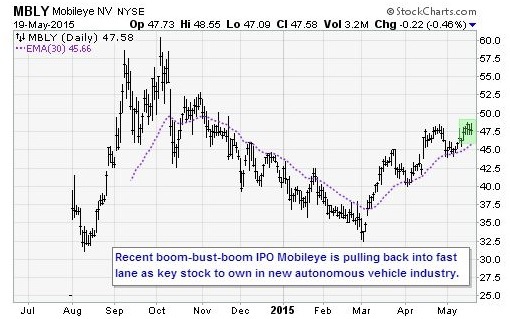 -- The market for autonomous technology will grow to $42 billion by 2025 and self-driving cars may account for a quarter of global auto sales by 2035, according to Boston Consulting Group. Partially autonomous cars will be available as soon as 2017.

-- When most vehicles are driverless, annual U.S. auto sales will fall about 40% to 9.5 million, while the number of cars on American roads declines by 60% to fewer than 100 million.

-- “While extreme, a historical precedent exists,” Johnson wrote. “Horses once filled the many roles that cars fill today, but as the automobile came along, the population of horses dropped sharply.”

-- Every shared vehicle on the road would displace nine traditional autos, and each pooled shared vehicle would take the place of as many as 18, according to Johnson’s report.

-- Consumers’ cost of mobility would drop dramatically. By removing the driver from the equation, the average cost per mile to the consumer could be 44 cents for a private ride in a standard sedan and 8 cents for a shared ride in a two-seater. That would be well below the $3 to $3.50 a mile consumers now pay to ride in an UberX car or the $1 to $1.50 a mile for an UberPool vehicle.

-- The shift to driverless vehicles would benefit transportation network companies such as Uber Technologies Inc., autonomous technology providers such as Mobileye (MBLY) and makers of low-cost vehicles.

-- “While the Detroit Big 3 will still have pickups and vans (their most profitable segments), they will be challenged in” the markets for family autonomous vehicles and shared vehicles, Johnson wrote. “We see this as a further lid on the prospects for” traditional, mass-market automakers."

This is a really big deal and it's going to happen. Other organizations that will have to start preparing now for this future are parking lot owners; auto dealerships; auto insurers; auto finance companies; municipalities that depend on taxes from auto dealer rows; auto workers; mall owners who have devoted tens of thousands of acres to parking; and emergency rooms that deal with the results of thousands of auto accidents. One big danger is the threat of cybersecurity attacks on robotic vehicles. Could a hacker lock someone in their autonomous car unless they agree to pay a ransom by PayPal?