Banking stocks have been on a roll lately and leading the new-high list is big cap, Wells Fargo (WFC). Wells is a money center bank that has regional bank roots and was up 1.2% on the day and looks great.

It was joined by JP Morgan Chase (JPM), up 0.9%, Goldman Sachs (GS), +0.4%,Capital One Financial (COF), +1% and a slew of other smaller regional banks like SunTrust (STI) and Citizens Financial (CFG). Now these are great leaders, unlike the motley crew we saw atop the charts a couple weeks ago. 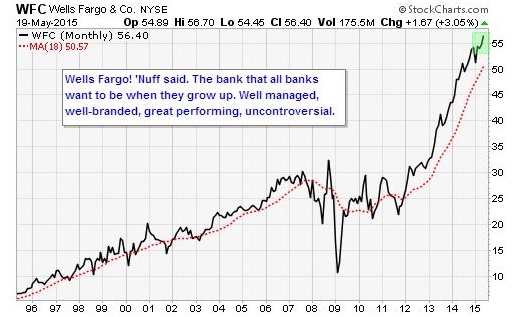 Why so many banks in the front ranks? They are all companies that become the most profitable when interest rates rise despite a flat Federal Funds rate because they can charge more for commercial and residential loans while not hiking payments to passbook savers. This is such a colossal rip-off of the public that it would be a scandal were the scheme not devised and implemented by the Federal Reserve. But I digress. Banks are leading because investors are betting big on the status quo and two important factors suggest this will continue.

1. Housing is on fire

United States housing starts jumped 20.2% to a 1.135 million seasonally adjusted annual rate in April, ahead of the consensus expectation of 1.02 million. The increase was the largest since February 1991, leaving housing starts at their highest level since November 2007!

All of this data is should mean increased loan demand at a time when yield curve spreads are very favorable for bankers.

2. Plunging Producer Prices means the Fed is on hold 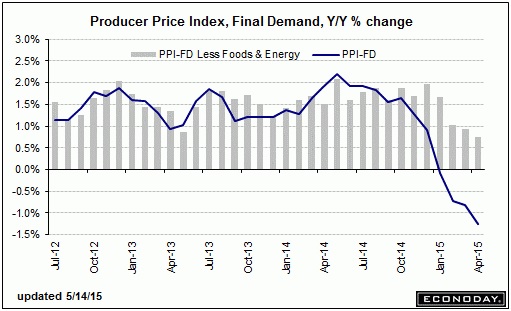 This delayed rate hike timing (expectations earlier this year were for a possible move in June) was bolstered by the ongoing decline in producer price inflation as shown in the chart above. In April, prices fell 0.4% on a monthly basis (vs. the 0.2% rise analysts expected). On an annual basis, prices fell 1.3%.

Combining the strong bounceback in energy prices over the last few weeks, with crude oil rising from a low of $47.05 to close April near $60, most assumed an inflation rebound would follow. The data suggests otherwise. That'll bolster the doves at the Fed when policymakers next meet on June 16 and 17. There is literally no rush to lift. And a continued flat Fed Funds rate means bankers get to keep borrowing on the cheap while paying passbook holders almost nothing.