The big issue for those of us who do not live in Greece is whether we should care at all. The answer is not that easy. The question is not whether an exit would negatively impact the earnings of the multinational companies that we own as investors but whether it would be emblematic of a larger global finance infirmity.

TIS Group analysts point out that Greece is a "petri dish for a sovereign crisis," with problems that are endemic across developed countries. It has underfunded pensions, a low birth rate, a heavily indebted government, and a high tax rate that is set to rise as social payments grow. And everything that central banks have done since the 2008 global financial meltdown -- QE, ZIRP and a dozen policies with two- to four-letter acronyms -- has been aimed at avoiding a sovereign debt crisis.

In this context, the fact that the European Central Bank and European Union are still talking to the intransigent Athens negotiators confirms that they appear to be willing to do almost anything to keep the current system going. Instead of engaging in austerity, though, Greece has been accused of using government debt to fund social programs.

So if Greece decides to thumb its nose at the world and default on its obligations after the incredibly extensive rescue and repair effort by the finest minds and deepest pockets in global finance, then this entire policy could be deemed a failure, and lead to other troubled countries going down the same path. 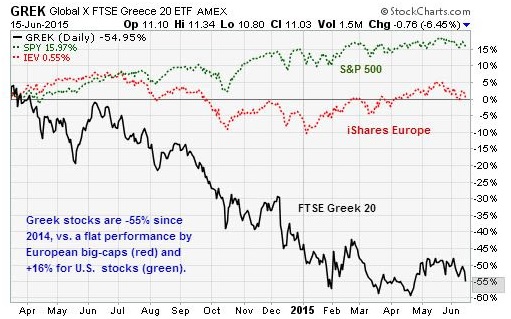 You can never forget that this is a sovereign country. It can't be thrown in jail or overrun with tanks. It can nationalize its banking system, start a new central monetary authority, clamp down on capital flight, bring back the drachma and blow up the entire euro experiment.

If you assume that Greece could never have paid back its debts, and everyone knew it, and this is the inevitable result, then why has this process taken so long? TIS analysts put forth the deliciously cynical idea that we have just witnessed a two-year stalling process that allowed holders of Greek debt time to reduce their holdings and hedge their exposure. Now that a significant amount of Greek wealth has been allowed to leave the country -- some put the figure at 400 million euros a day -- it can actually next come back to Greece in the event of a default is declared and a new currency introduced. This concept is so crazy it might just be right.

Despite my longstanding and well known view that nothing overseas matters to U.S. investors, I do sense that a long and stumbling path toward default will unsettle global capital for a spell. It probably won't last long, however, or at least not nearly as long as most people will think at the time, much as the Russian, Mexican and Argentine currency crises were dramatic in their moment but in the long term very transitory.

Should there be a blow-up over this during the summer, I would expect to recommend taking advantage of the fear by purchasing growth stocks in the areas that are the most likely to grow fastest in coming years like our Internet of Things list, mobile communications, biotechs, health care devices, solar and entertainment.