The labor force participation rate hit a new low of 62.6% in June, down from 62.9% previously. That was the lowest level since 1977, which is disheartening and frustrating.

I was a sophomore in college in 1977, so I can't offer any first-hand insights on the job market of that era. I did emerge from graduate school three years later in 1980 into the worst recession since the Depression, when unemployment was at around 11%.

It was hard to find a good job, and employers didn't have to pay much. I sent out 200 resumes and got two responses. I made $5.60 an hour at a newspaper, the L.A. Herald Examiner that had just completed a brutal strike. But ultimately President Reagan and Fed chief Paul Volcker vanquished the economy's demons and it wasn't long before the market was off and running on the 1982-2000 bull market. 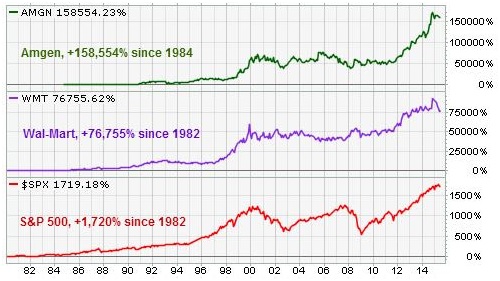 I have always thought it would be awesome to go back in time and buy Wal-Mart (WMT) and Amgen (AMGN) back then, when they were just getting started as public companies. They're up a mere 76,755% and 158,554% since, respectively. How hard would it have been to pull those ponies by the tail and hold onto them through thick and thin?

Fortunately you don't need to wonder too long. You can just do it right now. There are many companies like that at present. You just need to be brave and smart and have heart and really think about what the future might be like five years from now, or 10 years from now.

Don't just look right in front of your feet. Gaze at the horizon, read a lot about current innovations and the direction of the population and get out in front of the wave. Health care advances have to be a part of that, along with new uses for artificial intelligence, machine learning, the "internet of things," autonomous vehicles and solar energy and online commerce.

In 1980, the wave of companies like Wal-Mart introducing national big-format stores was just getting started. That doesn't sound like much today, but it was as important back then as the advent of e-commerce is today. And, as for Amgen, it was innovating like crazy, and would become the first biotech to become a conventional pharmaceuticals maker.

There are many more of these companies growing right in front of us, right now, in plain sight. Probably Facebook (FB) for one. Probably Amazon.com (AMZN). Maybe smaller companies that we have discussed, like Ambarella (AMBA) and Mobileye (MBLY) and Palo Alto Networks (PANW). We won't know for sure for years, but this is a long-term game played in real time. Don't miss out, and don't get discouraged when you fail from time to time.