Coming out of the lows of sentiment like we saw last week, technical analysts always like to look for evidence of price action known as a "buying thrust." These are almost mythical advances out of a bottom that appear out of nowhere, and most people are hugely skeptical about.

Because almost everyone has recently been so negative on the market when these flashy bottoms occur, most miss the opportunity to buy at or near the lows. If you're a fund manager this is important because your "cash drag" at moments like this really impair performance -- particularly if you had sold some stock on the way down to lighten up.

Jason Goepfert at Sundial Capital looked at the question and observed that there is an open question as to whether the past week qualified as excessive pessimism. But based on extremes of number of indicators, it should qualify. We since saw three straight days of price gains of at least 0.5%. It's the first time we've seen this kind of thrust straight down followed by a thrust straight up since last October, he noted. 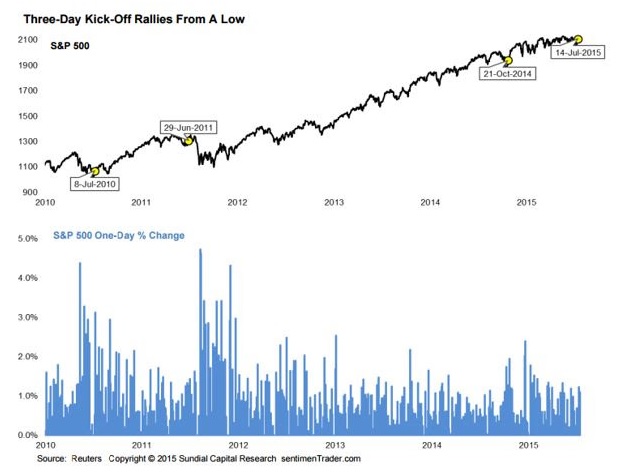 Goepfert then fired up his database and looked for similar instances back to 1928. He looked for three straight gains of at least 0.5% when the S&P 500 had been near a three-month low prior to the kick-off, and it also set a 52-week high sometime in the past three months.

Other than October, the other days that qualified over the past five years were in July 2010 and June 2011. The former was a good buy signal, the latter not so much, as shown in the chart above. The sweet spot going forward was one to three months later when stocks showed consistent and impressive gains with few losses of any magnitude.

When he relaxed the parameters by loosening up the proximity of the three-month low, then there were 34 occurrences, and the forward returns in the S&P 500 remained almost exactly the same. A note of caution is weak short-term returns. The next week was iffy, with some heavy pullbacks and testing of the low prior to the kick-off days, he said.

Only 5 of the 21 occurrences displayed what could be considered truly v-shaped bottoms with no testing of the low as buying pressure just kept pushing the S&P 500 higher in the days and weeks ahead.

A rule of thumb that worked fairly well, Goepfert said, was that if the S&P 500 was unable to gain any more than +2.5% over the next several weeks, then it was more likely to be a failed signal over a multi-month time frame.

Also, the successful signals rarely (18% of the time) lost any more than -3% even while they may have tested the previous low. That gives us a quick guide to use in the weeks ahead to see if this kick-off is likely to be a failure when looking out longer term, he concluded. Great point. We'll keep watching. The point is that V-shaped bottoms are very rare. Most of the time the market goes back and tests somewhere near the prior low. We'll keep an eye out.