There are a lot of different definitions of a "bear" market, but I prefer the simplest. If an index or stock is under its 200-day average for a few weeks, and if it closes under its 12-month average at the close of a month, it is at minimum in a bear cycle.

By this simple definition, we are currently in a bear market. That's not meant to be disparaging or gloomy. It's just descriptive. I know there are arguments that we are just experiencing a very oversold condition in a bull cycle, but whatever -- the point is that you need to choose, and then act appropriately.

While I was debating this idea with myself, lo and behold a very appropriate study lands in my mailbox from sentiment expert Jason Goepfert. He notes that is "possible that we're seeing a bear market rally that is doomed to fail. If so, then according to the 29 other failed bear market rallies that stocks have suffered since 1928, this would be one of the fastest and weakest failed rallies in history."

He first quoted himself from a report in May 19, 2008, in which he said, "According to the averages, if this is just another bear market rally and we're doomed to see a lower low sometime this year, then the S&P 500 should be putting in a high very soon, and it shouldn't see that much more upside."

It was a freaky coincidence that that happened to mark the exact peak of the bear market rally, he notes, but this week he updated and revisited those figures to better understand the current scenario.

Since 1930, Goepfert identified 29 bear market rallies that ultimately failed and led to new lows. On average, the S&P rallied 11% off a prior low and lasted 47 calendar days before peaking. 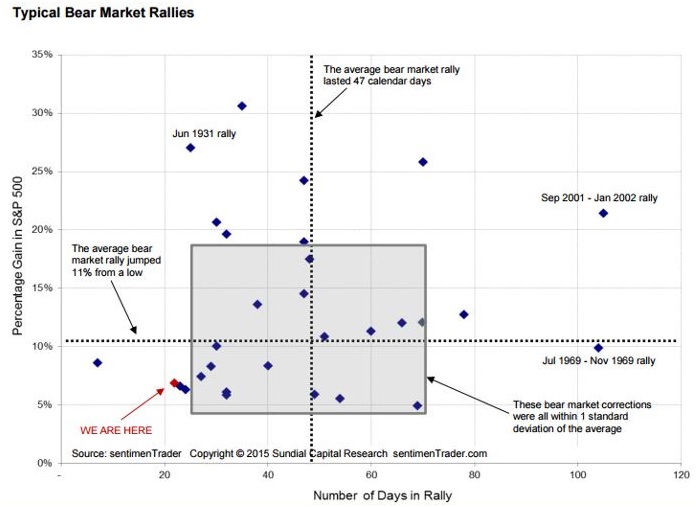 If Wednesday marked the peak, then this rally would have lasted 22 calendar days with a rally of less than 7% from the Aug. 25 low. According to the graph above, that would put us well below average in terms of both magnitude and time, Goepfert notes. In fact, this would qualify as the 2nd-shortest failed bear market rally of all time.

(In the chart, the number of days of rally are horizontal and the S&P 500 percentage gain is vertical. We're in the lower left quadrant of smaller gain and less time.)

There were seven rallies that were smaller in percentage terms, the analyst said, so the recent rally would be small but not more than one standard deviation outside the norm. The current rally has retraced 50% of the decline from the summer high, and prior bear market rallies retraced 44% of the decline on average, so we're right in line there.

Based on this data, Goepfert figures it is likely that the market will rally more even it is ultimately bound to roll over to new bear-market lows.

I have been arguing that a top would come in the third or fourth week of September, which just so happens to be this week and next. If the Fed is not confident enough to raise interest rates by a quarter of a point after six-plus years of intense global quantitative easing, I'm not quite sure why we should be optimistic.

The best way to survive in an environment like this, should the bear market continue, would be to follow MacroSwitch to pir Strategic Advantage letter, and also painstakingly build a Persistent Value portfolio even when the market does not appear to be going well. You'll see as we go along.