The giant global auto industry is careening toward unprecedented disruption as its 100-year-old business model is turned completely inside out.

That is the big takeaway from a research report published recently by investment banker Morgan Stanley. In Shared Autonomy, equity analyst Adam Jonas explains how the inevitable migration from the old business model to ride sharing/hailing will transform the still vibrant car business into an highly regulated and intensely price competitive utility. That will mean profound changes for the way cars are sold and insured. It will also disrupt airlines, energy, real estate and utilities.

The reason is math. Traditionally, automakers have relied on simple metrics like units sold and average selling prices. Last year, 80 million cars were sold at an average price of $19,000, for a total of $1.5 trillion. The Silicon Valley global mobility model places the emphasis on miles driven. Last year approximately 10 trillion miles were driven at an average cost of $1, for a total of $10 trillion. 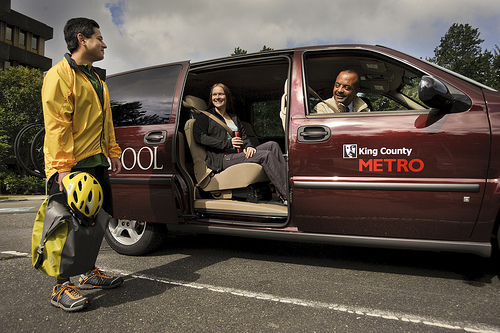 To get an idea of what this represents, Toyota runs the biggest car business in the world with sales of about $250 billion. Global mobility will be a business forty times that size.

Carmakers and private equity investors can do the math, too. General Motors (GM), Volkswagen and Toyota have made major investments inmobility businesses. Toyota has placed its bet with Uber. In August, the Silicon Valley super startup announced it would begin testing a fully autonomous ride-hailing service in Pittsburgh.

Morgan Stanley analysts think autonomy is the tipping point. “We believe shared and autonomous cars can deflate the cost per mile to as little as 20 cents, triggering a doubling of global miles travelled by 2030,” Jonas says.

Despite the disruption and considerable collateral damage, the new mobility business model is gaining momentum. In 2015 there were 36,000 traffic deaths in the US, or 100 per day. That is an 8% uptick.Ride-hailing, later augmented with autonomy is widely believed to be safer. President Obama announced guidelines for self-driving cars in September. California reversed an earlier decision and will allow vehicles without steering wheels and brake pedals on public roads.

There will be clear winners. “We see the greatest value in the content and data produced and consumed by the 68 million years of collective humanity trapped inside a mobile, super-computing cyborg swarm. This precious time is ripe for liberation and monetization” Jonas writes.

That’s a particularly artful way of making the case for Netflix (NFLX),Facebook (FB),Amazon (AMZN),Alphabet (GOOG) and Apple (AAPL) for Content. And Nvidia (NVDA),Qualcomm (QCOM), Ambarella (AMBA),Splunk (SPLK) andIntel (INTC) for infrastructure and data. We will be adding more of these to our buy list soon.