Unless you’ve been holed up in a cabin somewhere binge watching the latest season of The Unbreakable Kimmy Schmidt you’re probably aware Amazon (AMZN) is unbundling its video streaming service from Prime to become a standalone service. In theory this makes it a formidable competitor for Netflix (NFLX) which, by the way, is the producer of Unbreakable Kimmy Schmidt.

But is that really true? The research analysts over at Bespoke Investment Group gave it a hard look and their sense, based on consumer polling, at least on a preliminary basis is “No, not yet”.

The two most notable streaming services, Netflix excepted, are HBO Go and Amazon Prime. Interest in the former is growing by leaps and bounds. According to Streaming Media Providers, in January 2015 just 21% of viewers were even aware HBO Go existed. By April of this year that number had catapulted to 61.6%. A new season of Game of Thrones had something to do with that. Even still, based on the Bespoke analysis, subscriptions grew by about 2%. That is hardly a blip. 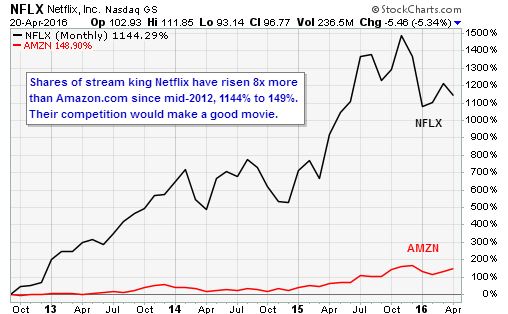 Then there is Amazon Prime. The subscription service, until this week, was essentially about free shipping with a video streamer thrown in for free. Fully 45.5% of Amazon shoppers in the U.S. subscribe to Prime but only 5% say the video service is the draw. It is true that Amazon does have some award winning and critically acclaimed TV shows in Transparent and Mozart of the Jungle, as well as my favorites, Mad Dogs and Bosch, but that is not why people are grabbing Prime. If that is the case, viewers are unlikely to gravitate to the standalone service.

And finally, there is the whole Netflix loyalty dynamic. Say what you will about selection and even the recommendations cue, the service really does just work. It’s really kind of magical. Bespoke analysts found that three years ago fully 15% of subscribers were looking to cancel the service. That number is now down to less than 10%. In short, rumors of Netflix’s death at the hands of the competition are both overly dramatic, so to speak, and premature.

It’s been about 4 years since Marissa Mayer took the helm at Yahoo! (YHOO). If you just look at the share price, she’s been a champ. It was near $16 when she got started on her grand plan to revitalize the slumping web portal/search engine/ incubator. Yesterday shares were hovering near $38. Not bad. If only it were that simple.

Depending on your level of financial flexibility you could make the case Yahoo’s timely investments in Yahoo Japan and Alibaba (BABA) are currently worth about $37 per share. You can see where this is going. To make matters worse, those great Asian investments, yup, they happened before Mayer took over.

To make matters worse still, Yahoo! under Mayer has been an abysmal financial performer. Any way you slice it, the company is shrinking. It's still the third largest web property in the United States behind Google and Facebook (FB), but sales are shrinking fast and management under Mayer seems clueless to stem the leakage.

On Tuesday, Mayer announced her latest turnaround effort -- hard to tell by now what version we’re on -- is working. Yet sales, excluding member websites, were down 18% to $859 million. Sure, that was less bad than the $846 million Wall Street analysts had been expecting but that only speaks to their morose view of management. It’s small consolation. Then again, they may be on to something. The consensus estimate was $860 million for the current quarter. Mayer told them they should tamp down the enthusiasm because $810 to $850 million was more likely. Some turnaround.

But wait, there is a happy ending, maybe. On Monday, Verizon Communications (VZ), the Daily Mail newspaper and a couple of private equity firm made early bids for Yahoo. Stay tuned.

OK now here's what happened on Wednesday. Crude oil opened lower on news that the work stoppage in Kuwait had ended, but rose following the weekly EIA inventory report. The data showed a 2.1 million barrel build last week, below consensus for a 2.4 million barrel rise and less than the 3.1 million build indicated by the API data the prior day. In addition, Iraq’s Deputy Oil Minister Al-Nima said that OPEC members and other producers were planning to meet in Russia in May in an attempt to revive the proposed production freeze recently scrapped at Doha. However, Russian Energy Minister Alexander Novak today said that there are doubts any freeze deal can be concluded, adding that Russia has not been invited to OPEC’s scheduled June meeting. The beat goes on.

Over in China, stocks were under pressure, with Shanghai Composite falling 2.3% and Shenzhen losing 4.3%, following talk of fatigue following the recent run. A potential overhang: hints that Beijing may dial back some monetary policy support. The official Xinhua News Agency said the People's Bank of China will be more prudent with monetary policy. It cited comments from PBoC chief economist Ma Jun, who stressed that monetary policy must guard against risks, and highlighted the need to avoid excess corporate leverage and consider the effects of loan growth on prices. Good luck with that. The cat's already out of the bag.

Back at home, the most interesting economic data was the rebound in existing-home sales – they were up 5.1% in March month over month for a 5.330 million seasonally adjusted annual rate, ahead of consensus for 5.175M and significantly better than February’s downwardly revised 5.070M level. Sales were up 1.5% y/y. However, sales were softer at both the high and low ends of the price spectrum due to supply limitations and affordability pressures.

On the corporate front, Coca-Cola (KO) posted a low-quality earnings beat and was light on sales, and took a massive 4.8% beat-down. The stock is so overpriced, at 26x sales, it's nuts. Intel (INTC) rose 1.3% despite 2Q revenue guidance that was below consensus. The reason: analysts love a big cost reduction, and the chip giant said it would fire 11% of its work force. Wow. Just wow. That's a whole lot of highly trained and well paid people who will be looking for work.

Utilities and REITs were crushed along with the staples, so maybe the market is getting ready to finally turn to more cyclical, risk-on kinds of names for the rest of the month. That would be a big surprise to people, so it might just happen. The least expected outcome right now, amid the earnings recession, is a big and blustery rally, so you must make room in your mind for that possibility.