Global markets came under heavy pressure over the past few days after voters in the United Kingdom surprised the world last Friday with a decision to leave the European Union after more than 30 years of membership.

The political fallout is just beginning, with pro-remain British Prime Minister David Cameron resigning, effective in October and "Article 50" -- the EU's exit clause -- yet to be invoked by the British government.

The prior example we have was Greenland's 1982 decision to exit the EU's predecessor after a popular referendum vote for independence . After much wrangling over fishing rights (an industry responsible for the vast majority of the country's economy), it finally left in 1985 under the Greenland Treaty.

It took more than 100 meetings and three years to extricate a frozen island of 56,000. How long would it take a developed island of 65 million? Long enough not to ever happen is one distinct possibility.

This is going to be geopolitics in a blender on a boat at night during a hurricane. Anyone who wants to board the next elevator to the future, press C for crazy, confusing and confounding. Don't believe everything you read about what's coming. No one really knows. 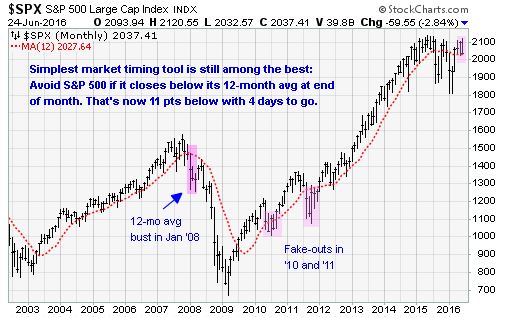 To say the result was unexpected is a massive understatement. Betting markets had the odds of remain at around 90% on Thursday. The Dow Jones Industrial Average enjoyed a surge back above the 18,000 level into the close. Early Friday morning, the smell of panic was in the air. The vote was seen as a repudiation of the post-war era of globalism driven by anger over immigration, stagnant economies, and unaccountable bureaucrats in Brussels.

The CBOE Volatility Index (VIX), Wall Street's "fear gauge," posted its fifth largest gain on record after trading in U.S. equity futures was halted overnight. The Nasdaq Composite suffered its largest rout since 2011 and is now down 6% for the year. The gap down at the open was the U.S. market's worst since 1987, a sign of fragility and lack of liquidity. Gold's 4.9% surge was among its biggest days since Lehman Brothers failed in 2008.

The British pound dropped to levels not seen since the mid-1980s. European bank stocks, the epicenter of all of this because of their European bond holdings and exposure to the local economy, were crushed. A surge in the Japanese yen smashed popular currency carry trades and torpedoed the Nikkei 225 index to a loss of 1,286 points or a stomach-churning 7.9%.

Greek stocks lost nearly 16% while Italian stocks were down 12.5%. Italy is seen as a prime candidate to consider an independence referendum (along with France and the Netherlands) as pro-nationalist political sentiments rise. A breakdown in the European Union would threaten Greece's bailout programs, since a smaller Euro area would put the rescue burden on a smaller number of countries.

The policy elites are in a bind. For one thing, all the obvious policy easing levers have already been pulled.

The Federal Reserve has raised interest rates just one this cycle, leaving the Federal Funds rate between 0.25% and 0.50%. So there isn't much room to cut rates. Aggressive asset purchase stimulus programs have already been deployed, with the Fed holding nearly $4.5 trillion in assets vs. $900 billion back in 2008.

The Bank of Japan is buying stocks via exchange-traded funds. The European Central Bank is buying corporate bonds. These both unprecedented efforts. Both have deployed negative interest rates with calamitous effect as they have pressured bank profitability by narrowing net interest margins. What is left? The outright purchase of individual stocks? In the case of the Fed, it's forbidden. Not so overseas. 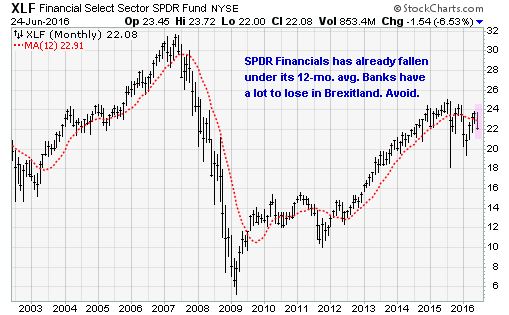 This all comes at a time of global economic vulnerability.

Here in the United States, we're in the midst of an earnings recession with S&P 500 income down for the last four quarters in a row. Deflation is a real threat, made worse by elevated public debt-to-GDP ratios in the developed world. Spain, Poland, Greece, Italy, Switzerland, and the Euro area as a whole are all in outright deflation. France, the Netherlands, Ireland, Germany, the UK, and Finland all have inflation rates near 0%.

In Asia, China is contending with a slow-burn credit crisis by attempting to manage down its currency in an effort to bolster exports. A collapse in the British pound and the euro threatens that effort and could unleash outright currency manipulation and a good old fashioned mercantilist foreign exchange war. Japan is a mess, with a 229% debt ratio, a 6% budget deficit, deflation, and an economy on the verge of contraction as officials obsess over keeping the yen weak in a similar effort to bolster exports.

And finally, any policy response is likely to only deepen the problem.

If central bankers support markets here -- keeping stocks in the low-volatility sideways crawl of the last three months, capping a three-year consolidation near Dow 18,000 -- it will prove all the pre-Brexit fear mongering hollow and will encourage pro-independence votes in Italy and elsewhere. Spain is holding new general elections on Sunday with the anti-bailout Podemos party ascendant.

But if policymakers let markets fall, volatility will beget volatility as one of the few bright spots in the global economy darkens. Years of central bank intervention and easy gains have encouraged risk taking and leverage accumulation in the United States.

The collapse could be swift and severe, which is why it probably won't happen. The monetary policy elites got that way by being savvy, cunning, and self-interested.. They will fight the onslaught with all they've got. Don't count them out.