Amazon (AMZN) is getting back into mobile phones. The company announced an experiment to subsidize two low-cost Android phones.

This is not the first time Amazon’s tackled mobile. In 2014 it unveiled the Fire phone, a high-end smartphone with a heavily skinned version of Android, a cool 3-D interface and the ability to turn almost anything in the camera viewfinder into an Amazon.com SKU. That made it super handy for buying things online. Clever.

Unfortunately, the Fire phone didn’t sell. Well, that’s an understatement. It was a dud , selling just tiny fraction of its inventory. In fact, the only good news was that it was appropriately named for the ensuing big fire sale. 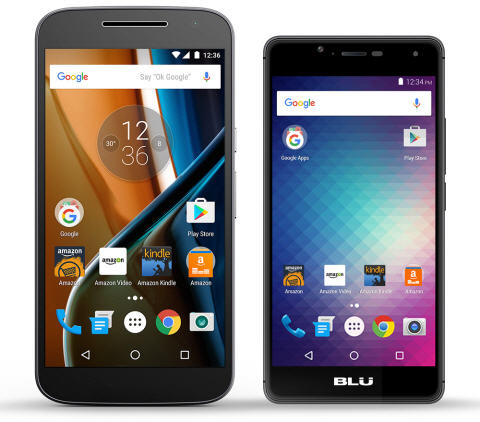 This foray is considerably less ambitious. The Verge is reporting Amazon will offer discounts of $50 on the new Moto G and BLU R1 HD. The devices usually retail for $200 and $100 respectively so the subsidy makes them extremely appealing. The Moto G, a robust and very well reviewed device, is the latest iteration of Motorola’s best-selling phone ever, and the BLU R1 offers specifications that would have been considered flagship level just two years ago.

There is a catch though. You can’t get the discounted price for these devices unless you’re already an Amazon Prime customer. That service will cost $100 annually or $11 per month and comes with free 2-day shipping, unlimited music, photo storage and access to its Netflix (NFLX)-like Prime Video service. You’ll also have to put up with annoying pop-up ads and several preloaded Amazon mobile applications.

What Amazon gets is another hook for Prime and a snappy device to showcase its growing suite of services. EBooks, audiobooks, music and video streaming have become very important to Amazon. In fact, its founder Jeff Bezos often talks about how these seemingly insignificant businesses help the company maintain its flywheel.

This is an important concept in business. The idea was developed by Jim Collins and argues businesses can operate like a huge flywheel. These extremely heavy wheels are very hard to get started. In fact, it requires herculean effort. However, once started, they are progressively easier to keep spinning. Once they get up to speed, natural momentum takes over and that makes them difficult to slow down.

That’s what Bezos is doing with all of these small businesses. On paper they seem silly, even unrelated. Yet there is no doubt that producing television series for Amazon Prime definitely sells more spring jackets and laundry detergent and sunglasses at Amazon.com. Bezos and his army of managers have the spreadsheets to prove it . And, while low-cost Android smartphones might seem like a dumb idea on paper – it’s not as though smartphone manufacturers not named Apple (AAPL) or Samsung have found a way to make consistent profits – but you can immediately see how adding this to the Prime ecosystem is going to work. These phones are going to entice more people to add and maintain Amazon Prime memberships. Statistics show this is the surest way to increased sales at the online store.

Amazon is certainly not immune to failures. Its Fire phone was a spectacular mistake. However, it has a winning formula with its Prime concept. We live in a mobile-first world. Tying smartphones to Prime seems like a winning proposition. Amazon remains a buy on dips.