GlaxoSmithKline (GSK) and the Verily Life Sciences unit of Alphabet (GOOGL) believe they can stand traditional medicine on its head with tiny implantable robots.

The pharmaceutical industry has made tremendous gains in medicine through better chemistry. That’s the basis of modern medicine. There is now reason to believe there may be another way. Clinicians have made significant medical progress by regulating and in some cases changing electrical impulses to the nervous system.

GSK and Verily want to take that research to the next level with implanted machines no bigger than a grain of rice. They’ll attach themselves to tissue in our lungs, gut and other regions to zap nerves and hopefully change the way our bodies deal with chronic illnesses like asthma, Crohn’s Disease, diabetes and even arthritis.

If all of this sounds a lot like the plot of 1966 film Fantastic Voyage that’s because it is – minus the cheesy special effects and Raquel Welch in a jumpsuit. 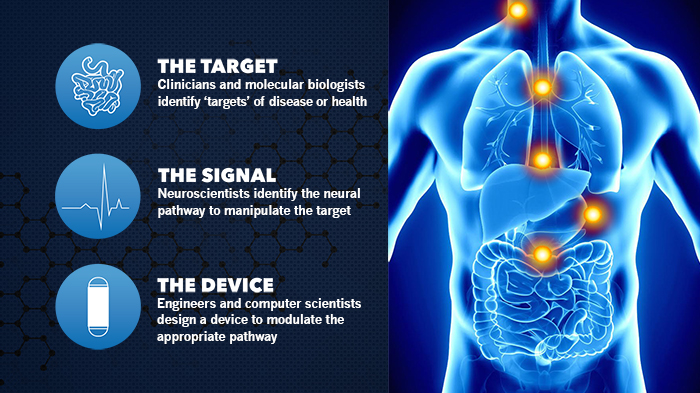 The companies will invest $715 million in a brand new bioelectronics business they’ll call Galavani Bioeletronics. The new unit will set up research facilities near its parents’ digs north of London and in San Francisco. There, the teams totaling 30 scientists and clinicians will pool existing intellectual property and begin the process of studying and building the tiny battery powered devices.

The new company takes its name from the Italian researcher Luigi Galavani, considered the father of neuroscience. He gained fame by animating severed frog legs with electricity in 1780. While that might seem like a strange way to spend time in the eighteenth century, keep in mind doctors continue to use the precepts of that seminal work today with pacemakers. Galavani Biosciences plans to follow that lead too, only with substantially smaller gear.

This has been a focus of GSK for some time. Since 2012 it’s been pouring money into the nascent field with zeal. Moncef Slaoui, the chairman of its global vaccines unit explained:

“Many of the processes of the human body are controlled by electrical signals firing between the nervous system and the body’s organs, which may become distorted in many chronic diseases. Bioelectronic medicine’s vision is to employ the latest advances in biology and technology to interpret this electrical conversation and to correct the irregular patterns found in disease states, using miniaturized devices attached to individual nerves. If successful, this approach offers the potential for a new therapeutic modality alongside traditional medicines and vaccines.

“This agreement with Verily to establish Galvani Bioelectronics signals a crucial step forward in GSK’s bioelectronics journey, bringing together health and tech to realize a shared vision of miniaturized, precision electrical therapies. Together, we can rapidly accelerate the pace of progress in this exciting field, to develop innovative medicines that truly speak the electrical language of the body.”

It’s hard to imagine technology has reached the point where scientists are serious about tiny implanted robots capable of fighting chronic illness. It seems like science fiction yet this is where we are. One of the largest pharmaceuticals and an offshoot of one of the biggest technology firms believe it is both possible and transformational.

GSK and GOOGL are the two ways to play for now.