It doesn’t get the notoriety of Apple, Google, Facebook and Amazon. It’s not even really a software company yet it’s been a better technology investment and the outlook is sunnier.

Nvidia (NVDA) beat Wall Street consensus revenue forecasts in early August by $200 million, sending the stock to another record high. The company is executing and building best in category products in four high-growth parts of the technology world: gaming graphics, professional visualization, data centers and automotive electronics. It went down a path most hardware companies have been reluctant to travel. It chose to go upscale, ignoring the much larger middle of the marketplace. It the process, Nvidia secured premium pricing as competitors suffered commoditization. 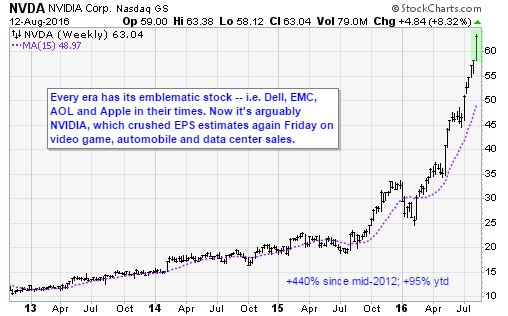 It’s no coincidence that other big technology companies have also followed this formula to success. With Prime, Amazon charges its customers a fee to buy goods and services. Apple, despite its recent innovation woes, is still considered the premium smart device maker. Facebook and Google charge ad buyers and advertisers a premium for what are considered the most effective targeting tools online. All of these firms succeed because they built best in class products and services that demand premium pricing.

Nvidia CEO Jen-Hsun Huang moved the company in that direction years ago as the personal computer market began to mature. The first big bet was on high-end graphics cards for the most expensive PCs. At the time it seemed crazy. After all, who in their right mind would pay several hundred dollars for a card when you could get a whole Dell for that? Then computer gaming exploded. It’s still one of the least well understood parts of technology landscape even though game software platforms like Activsion Blizzard (ATVI) routinely make new highs, and Amazon and Google have invested billions building live stream game play network on top of their massive data centers.

Coincidentally, those and many other data centers are in the process of a massive upgrade cycle. The industry is embracing artificial intelligence. Deep learning, the part of the data science that makes sense of images is at the forefront. Nvidia’s DGX-1 is a supercomputer in a single, rack mounted box capable of crunching software written to see and understand imagery. Far out software applications like real-time signage translation and 3-D mapping are not just plausible; Nvidia even developed a suite of tools based on its Pascal GPU architecture to make it all seamless.

Those software skills are winning over converts in auto manufacturing. Although nothing concrete has been announced, the company already has a working relationship with Tesla (TSLA). As the electric car maker works to bring the next generation of Autopilot to market, Nvidia’s software and its new trunk-mounted Drive PX2 supercomputer are expected to will be a big part of the upgrade. The system already has an impressive catalogue of successes including handling self-driving duties in driving snow and on winding dirt roads. It manages by building impressive 3-D maps so precise they’re accurate to within centimeters. It would be an huge upgrade to the current Tesla software and go a long way toward the full level 4 autonomy the company promises in its master plan part deux.

And Tesla is just one important relationship in the automotive sector. Nvidia has long standing working partnerships with BMW, Mercedes, Audi, Volvo and Honda among others.

The importance of software is a recurring theme in technology these days. It’s disrupting everything by systematically removing all of the fat around the middle. To survive, companies across all sectors need to steer clear or risk commoditization. Nvidia went upstream and flourished. The stock has blasted higher, bested only by gold miner Newmont (NEM) in the S&P 500 during the last year.

Although the outlook for Nvidia is bright, obviously, I would not chase the stock here. I would continue to buy the shares into inevitable pullbacks.