Safety is for suckers. Our suite of research services have helped thousands of independent investors grow wealth by harnessing the power of peril.

Learn to turn fear and confusion into clarity, confidence -- and a fortune

Try our flagship service for FREE. Tactical Options: Click here. Members have made more than 5x their money this year.

-- The Dow has been the best due to its value orientation and higher dividends.

-- All the worst performing techs are up the most in the current rally, which is typical. Rallies off bottoms are all about the concept of “the last shall be first.” … Shares of the worst cohort are back over the middle of their Keltner channel, a great first step, but now we want to see if they can get back to the top of the Keltner channel and ride the updraft as bears stand aside and lick their wounds. 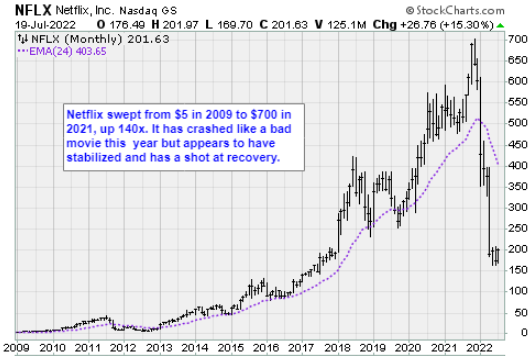 -- Netflix crossed over its mid-channel a few days ago and is now pressing up against its upper channel. A jailbreak from recent lows will stun the bears as bulls take aim at closing the gap at $325, a move of 62% that would still leave the streaming media giant down 54% from its November high! Netflix can be a leader due to its superior management, relentless innovation, and important and much-loved product. Even including its recent collapse, Netflix is still up 4,622% since 2009. 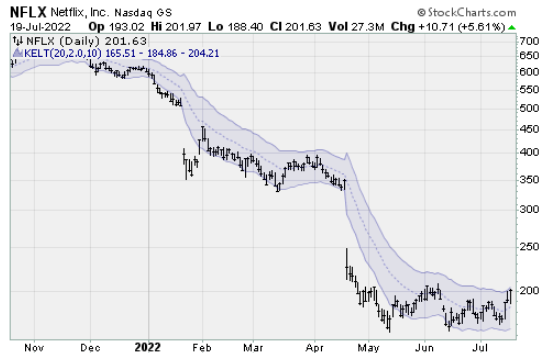 Action: Netflix deserves to be back in our active Digital Transformation portfolio. It’s time to see DT stocks reassert their important place in the growth and innovation universe. Set a 10% trailing stop in case the story collapses.