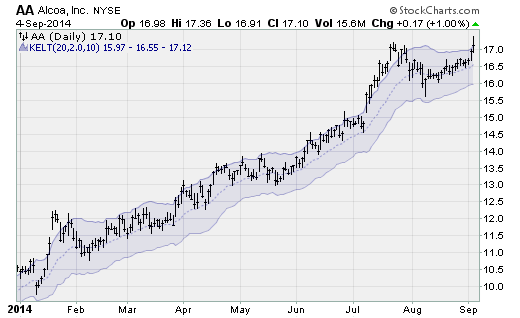 We had a successful play on Alcoa October $16 calls this week. Alcoa is a $19.5 billion aluminum miner and producer based in Pittsburgh. It went through some hard times earlier in the decade but has come out very nicely on the other side in synch with improvements in end markets such as automobile, airplane manufacturing and commercial real estate development.

Shares flattened out within their uptrand in mid-August, which compressed the implied volatility in their options — making them cheap. Shares have very positive seasonality in September, so we recommended the calls at a cost basis of $1.00. They rocked higher in the very next two days, and we were able to sell the calls at $1.40 for a quick 40% profit.