Cornerstone Macro analysts were out with a fascinating report this week that tries to explain why retail sales growth is stagnating despite the improvements in hiring and the economy. The short version is that consumers feel so burned by debt over the past twenty years that they are finally taking steps to reduce it in persistent ways.

CM analysts note that the New York Fed’s Household Debt and Credit Report shows that consumer debt fell at a $72 billion annual rate in the second quarter, following three quarters of modest debt growth. The decline was driven by a whopping $328 billion decline in mortgage debt. The analysts conclude that consumers in the current cycle are reluctant to amass debt and are increasingly sensitive to the cost of credit. As a share of disposable personal income, consumer debt has dropped to 89.7%, down from 115% just six years ago, as you can see in the chart below. 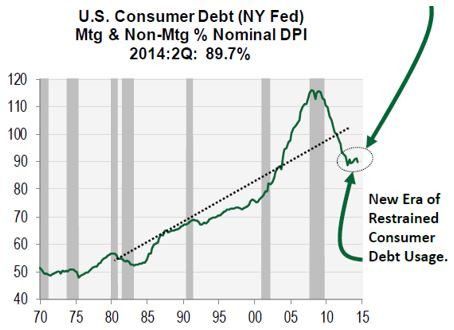 The CM analysts observe that since nominal retail sales in July were flat month over month and real sales (i.e. inflation adjusted) were down 0.1%, no one should look to the consumer as the driver of new growth for the U.S. economy. Household spending is being restrained by consumers’ reluctance to lower their savings rate and borrow as excessively as they did in the past.

This downshift in borrowing is creating a lot of turmoil for many consumer-focused businesses, including old stalwarts like McDonalds (MCD), Nike (NKE) and Best Buy (BBY), though some businesses that especially service-oriented or have special niches are still doing well, such as Amazon.com (AMZN), Chipotle Mexican Grill (CMG) and Sketchers (SKX).

Two other categories of strength: Autos, due to auto loans that are much lower than credit card loans, and furniture and home building/remodeling material. Apparently consumers are buying fewer homes and fixing up the ones that they have more. That’s bad for Beazer Homes (BZH) but good for Lowe’s (LOW). LOW is about 30% undervalued, so look for it continue to rise. The analysts conclude that the “smarter” consumer who is borrowing less and shopping for rates is here to stay, and will be a drag on lofty expectations for a retail sales pickup.