The Wall Street Journal and Bloomberg reported midday that Avago and Broadcom were considering a $37 billion merger of near-equals, most likely led by Avago. This would be another in a series of blockbuster moves in the semiconductor industry, following in the footsteps of NXP Semi's bid for Freescale Semi (FSL) a few months ago. 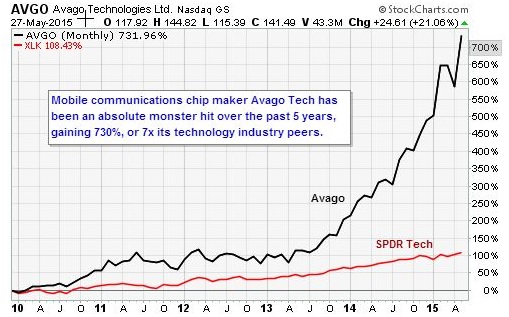 The industry is consolidating in part to gain more pricing power in negotiations with super-sized customers like Apple, Samsung and, increasingly, the automobile industry. As the world hurtles ever faster toward its mobile-first, software-everywhere, Internet of Things destiny, component manufacturers are scrambling to ensure that they can offer end-to-end solutions while retaining the best possible profit margins. The chip makers fear being run over by device makers bent on grabbing all the margin for themselves.

Think about it for a minute: Apple is increasingly dominating the standard mobile device world with its iPhones and iPads, and is working on extending its share of customers' wallets with new devices like the Watch and perhaps in the near future a car. Its competitors are falling by the wayside, as Microsoft is barely competitive with its new Nokia mobile device division, Samsung is relegated through a series of missteps to third-class status despite its size, and Google essentially gave up after punting its Motorola unit.

No device manufacturer has ever enjoyed this kind of dominance, with perhaps the exception of IBM in the early stages of enterprise computing. When dealing with smaller and weaker component suppliers, a dominant manufacturer can simply dictate the terms of every agreement as it enjoys an almost feudal hegemony. To counteract that, the suppliers in turn see a need to join together themselves to preserve pricing power. A combined Avago and Broadcom can stand up to Apple negotiators much better than either could alone.

The market loves a merger story because it shows what companies bound by fiduciary responsibilities are willing to pay for other companies. This puts a floor under the pricing of other related companies, such as Skyworks, Cirrus Logic (CRUS) and Analog Devices (ADI).

The consolidation wave is not over, not by a long shot, and will likely provide a positive tone for tech going into the summer as investors scramble to guess who's next.