While headlines have been focused on the machinations of the Federal Reserve and the timing of a hike in rates, folks who actually care about things like corporate revenue growth and earnings per share have been focused elsewhere. In the past week,  it's been retail chains.

Results have been flowing out of the sector, providing clues as to the strength of the consumer and the management teams that are best adapting to this odd environment. Confidence is high but has been tempered lately. Gas prices are down from last summer's high but up sizably from the lows set earlier this year. Job gains are strong but wage growth is moribund.

Results have been mixed, but there have been a few bright spots.

Best Buy (BBY) surged more than 5% in intraday trading last Thursday after beating first-quarter earnings per share by eight cents, beating on revenues, and reaffirming their second-quarter guidance. EPS came in at 37 cents while revenues clocked in at $8.56 billion. The electronics retailer, which fell on hard times after the HDTV and PC upgrade cycles waned, managed its third straight quarter of positive same store sales growth.

The catalyst was the quickly dropping price of 4K Ultra-HD televisions -- offering videophiles something new to lust over -- as well as the strong demand for the Apple(AAPL) iPhone 6 models. 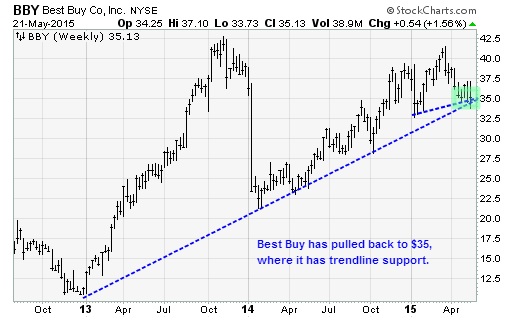 With nearly 10% of the share float sold short, we could be looking at a classic short squeeze situation as shares threaten to emerge from a downtrend channel going back to late March. A move above the 50-day moving average just above $37 a share would confirm the breakout. While full-year revenues at BBY are down about 20% from the peak hit in 2012, free cash flow is recovering and valuation multiples are attractive.

Management is looking for second-quarter revenue to come in around $8.9 billion vs. the $8.3 billion analysts were expecting. Analysts at JPMorgan Chase downgraded the stock to neutral back in late April on fears a slow start to the year for retail sales in general would threaten the all-important holiday shopping season.

While Best Buy's management said it was "too early" to talk about Q4 results, there is evidence that consumers will be better positioned in the second half of the year to boost spending.

For one, wage inflation appears to be just around the corner as the unemployment rate stands at 5.4% and is set to move lower.

Also, lower gas costs have been used to boost savings and pay down credit card debt -- freeing up purchasing power for later in the year once energy prices start sliding again, which looks likely to happen around September as the summer driving season ends and recent increases in Saudi drilling rig counts boost production.

And of course, we have another iPhone upgrade cycle coming later this year with rumors that Apple could release the iPhone 6s earlier than usual. Perhaps around August.

Shares don't look too bad here. BBY can really move when it gets going. We'll keep an eye on it.