One of the astonishing things about the development of China as a superpower is its dependence on energy imports. Despite having an incredibly large land mass and long shoreline, it has been graced by very few reserves of crude oil or natural gas. This is one reason it is the leader in developing solar energy.

However China is also finally trying to develop offshore oil and gas deposits in the South China Sea. The effort is bringing it into conflict with its many smaller neighbors in the region. Here is a description of the current situation, quoted directly from a report by analysts at TIS Group:

In April 2014, September 2014, and again in February 2015, the China National Offshore Oil Corp reported significant gas field discoveries in the South China Sea some 150 kilometers south of Hainin Island. China's first and only, deep-water drilling rig HYSY 981 discovered the field, designated Lingshui 17-2, at a depth of some 1,500 meters with an initial estimated yield of 100 billion cubic meters.

2. Plans for a major new pipeline to service new fields are in the works

To accelerate development of the Lingshui field, China plans to open an estimated 33 offshore blocks to bidding and plans to construct an underwater trunk pipeline from the mainland to the new field. For China, developing offshore energy assets in the South China Sea is only part of the strategic importance of this maritime region. 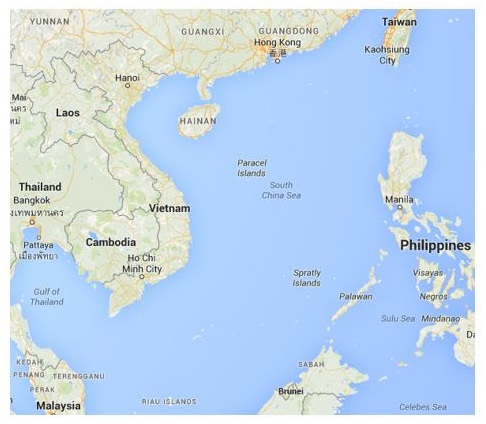 4. China is not alone in pursing the development of energy assets in the region

Not surprisingly, China is not alone in pursuing energy interests in the South China Sea or in attempting to defend unimpeded access to its shipping lanes. As a South China Sea littoral, Vietnam also claims rights to offshore energy assets which are being developed by PetroVietnam and joint partners that include Talisman, Repsol and Korea National Oil Corp. Other South Sea littorals, Taiwan, Malaysia, and Philippines have made sometimes overlapping and conflicting maritime claims in the South China Sea.

From a military standpoint, China's People's Liberation Army (the PLA) is the center of gravity for the region. This heightens regional tensions, predisposing each of the littorals to provocative miscalculation as to China's intentions in developing offshore assets that lie outside of its strictly defined maritime boundary. In this regard we note that China's interests in energy assets in the South China Sea are being augmented by the construction of airstrips and other facilities on several "reefs" in the Spratly Island chain. Recent satellite imagery confirms ongoing Chinese construction of land bases in the Spratly Island chain on Fiery Cross Reef, Gaven Reef, Johnson Reef and Mischief Reef in the South China Sea.

It is difficult to assume that these projects are anything but additional land base components of China's regional military buildup and modernization of the PLA. It is easy to surmise that from the new Spratly reef bases China's robust land launched missile arsenal can exert control over the entire South China Sea as well as using new runways to extend the range the PLA Air Force's air launched missiles.

6. China is not the only country in the region with military capabilities

"Shipping lanes in the South China Sea are also defended by other littorals armed with contemporary land launched anti-ship missiles. The limited confines of the South China Sea and the narrow straits that control access to the sea are well defended by littorals predisposing the area to rising tensions that have the potential to escalate into regional conflict. It is readily apparent that control of access to the South China Sea, its energy resources and shipping lanes is under the control by multiple sovereign states each possessing anti-access/area denial capabilities.

7. The US is moving counter Chinese influence in the region

Superimposed on this volatile admixture is the "Asia pivot" announced by the White House, which has rebalanced American military forces to an Asia-centric focus to counter China's growing influence in Eastern Asia and the Western Pacific. The Asia Pivot represents a potential deterrent to regional conflict, but its ability to assert with confidence that the U.S. military can ensure control of the regional seas and airspace is problematic.

This is a remarkable set of developments. It's not in the headlines yet, but could potentially contribute to a rising price premium for energy and could potentially be a flashpoint for global equities that has not been discounted.