Banks, entertainment and medical care have been rolling higher recently and these groups are a great combination for leadership. By the way the banks are particularly strong and there is a good chance they will keep it up.

Just keep in mind that regional banks respond positively to higher interest rates because they get to charge more for mortgages and other loans while still paying almost nothing for money. It's a scam but it's been going on for so long the usual activists on such things just look the other way. 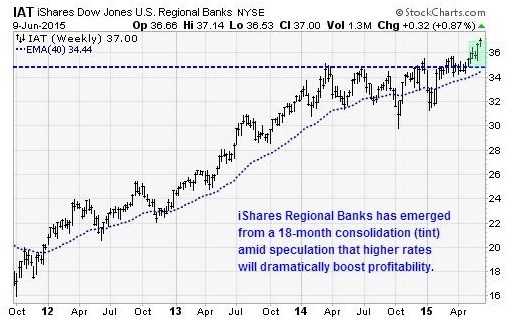 The strength of regional banks was very interesting during the 2000-2002 tech bear market. While shares of big companies like Microsoft (MSFT) and Intel (INTC) were ruined right along with all the profitless dot-coms, the regional banks kept on rolling higher almost every month, fueled in part by really cheap prices but also by consolidation fever.

This could happen again, if you think about it: A long-lasting rally in regional banks responding to higher rates nested right next to a rout of industrial stocks. In the 2000-2002 bear market, anyone who just focused on smaller banks and kept their hands over their eyes and ears, refusing to the siren call of seemingly cheap techs, did great. That's easier said than done but just keep that idea in your back pocket. We may need to refer back to it before long.