In a reminder that the world doesn't revolve around Federal Reserve dot plots or the machination of Greek bailout negotiations in Brussels, there has been a surge of merger news as companies quietly go on doing the good work of capitalism: Expanding, buying, selling, and trying everything possible to boost profits and maximize shareholder wealth.

Homebuilders Standard Pacific (SPF) and Ryland (RYL) agreed to a $5.2 billion marriage to create the country's fourth-largest company in its industry. RYL builds homes targeted to entry-level buyers as well as first- and second-time move-up buyers. SPF is more focused on move-up buyers in metropolitan areas in California, Florida, the Carolinas, Texas, Arizona, and Colorado. Geographic and product diversification were given as the justification for the tie up.

This is a sign of confidence in the health of the housing market, something that was corroborated by an increase in homebuilder sentiment to the best level since September.

Next up, Dealertrack (TRAK) agreed to be acquired by Cox Automotive for $4 billion. TRAK is a leading provider of software and services for car dealerships while Cox operates Kelley Blue Book and Autotrader among its businesses. With auto sales running at the best pace in 10 years, this is also a sign of confidence in the industry.

In the retail space, Target (TGT) sold its pharmacy and clinics business -- with more than 1,660 pharmacies and 80 clinics -- to CVS Health (CVS) for $1.9 billion. The deal benefits both as CVS is suddenly free of the specter of developing a large number of new pharmacies while the cash will be immediately accretive to TGT's bottom line.

Merger activity is also red hot in the managed care arena with Cigna (CI) reportedly turning down a $175 per share offer from Anthem (ANTM). UnitedHealth (UNH) reportedly has an interest in both Cigna and Aetna (AET). And both Anthem and Aetna are reportedly considering bid offers for Humana (HUM). 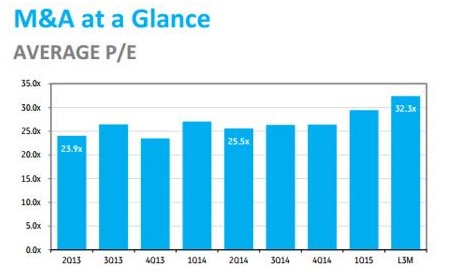 All this goes to show that even if investors are frightened by the prospect of the start of higher interest rates or a Greek debt default, corporate cash balances will remain a strong supporter of stock market valuations for the foreseeable future. CFOs are in a shopping-spree' mood, both in buybacks of their own stocks, and now their rivals's stocks.

You can see this in the chart above from FactSet research showing the swelling average price-to-earnings multiple of M&A deals. At present the health care and tech industries are the main beneficiaries but in the future I would expect to see much more in other areas, such as regional banks, as well.