July has a reputation for fireworks in the stock market, with positive returns most years. 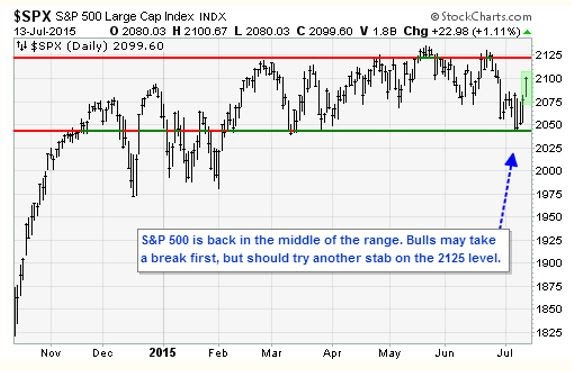 All ten sectors have seen positive median returns, led by energy, health care, industrials and technology. While no sectors have seen declines, the biggest underperformers have been Consumer Staples (0.56%), Financials (+0.67%), and Consumer Discretionary (+0.75%), reports Bespoke.

This tends to be a month for outsized gains. Only four of the top 15 performing stocks have been up less than 5%, on average. Leading the way higher, reports Bespoke, are Intuitive Surgical (ISRG), E-Trade (ETFC), and Under Armour(UA), with median gains of more than 10%. No stock in the S&P 500 has been positive during the upcoming two-week period 100% of the time over the last ten years, say the analysts, but Time Warner(TWX), Goldman Sachs (GS), International Business Machines (IBM), and Total Systems (TSS) have been up in every year but one.

The bottom line is markets had a heck of an opportunity to crater in the past few days, but have held their ground. Low expectations for the earnings season should lead to a lot of upside surprises. Summer months tend to be generally benign. Don't give into pessimism, even if the developments in Greece turn sour. Remember that at the end of the day, Wall Street really doesn't care about anyone but itself.