Hulu – a joint venture of Disney (DIS), Fox (FOXA) and Comcast (CMCSA) created to control the release of series re-runs – indicated last week that it plans to launch an Internet TV service in early 2017 that will include live broadcasts, according the Wall Street Journal .

This is kind of a big deal, and I’ll tell you why.

At present, Hulu is similar to Netflix (NLFX). Users find reruns of network broadcast shows they want to watch, press a button on their smart device, and stream it. Presto. But the shows are not live, which means you can’t watch sports or even chat with friends about crazy plot twists on social media while jointly watching How to Get Away With Murder. It just doesn’t work that way.

And that’s a big problem when the target market is tech-savvy and cord-cutting millennials. The new service would change that, showing Fox dramas and comedies, Fox News, Fox Sports, cable network FX, ABC broadcast shows, ESPN and family programming from the Disney Channel and NBC shows. The channel will go from re-runs to first runs. 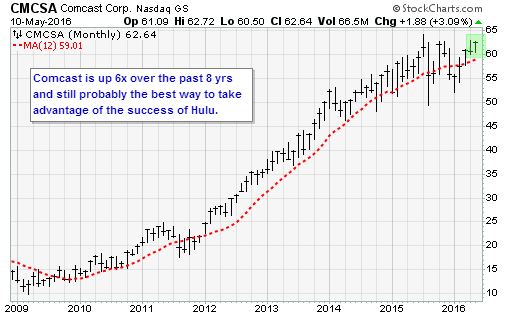 In theory, this is the service for which millennials have begged. And make no mistake, that demographic is what this is all about. Young people, with their YouTube and plugged-in smartphone lifestyles have been reluctant to fall in line, buy cable TV subscriptions and purchase stuff like their parents. They don’t like the cost or the bundling of stuff they don’t want. Perhaps its generational or maybe just the logical manifestation of their parenting but they want what they want .

It’s fair to say that the paradigm shift is worrisome for ad brokers and advertisers, the clients of traditional broadcast networks. They’re desperate to reach these people beyond spending a fortune with Facebook (FB) and Google. Hulu, with its old-school network broadcast roots, seems like a good alternative and the service is growing , having reached nearly 10 million paid subscribers. Live programming could be the addition that pushes the service to the next level.

But the new and improved Hulu, with a rumored price of $40/month, will face important challenges:

-- Amazon is stepping up its game with a monthly subscription model. Netflix, for about $10 monthly, has network effects that can’t be denied.

-- Sony’s PlayStation has bundled Vue packages in the $30-40 range.

-- Dish Network has Sling TV, which brings live programming and sports for $20.

-- And Comcast, owner of NBC Universal and a huge cable TV network in its own right, is also aggressively targeting potential young customers with its “skinny” programming packages, which include HBO’s popular Game of Thrones and other programming for just $15 per month.

While ad brokers and advertisers worry, cable TV and industry executives have often been very dismissive of the idea of losing malleable young people tocord-cutting efforts. Sure, TV viewership within the coveted demographic is shrinking fast , and there was a small decline in cable TV subscriptions in 2013-2014. But that was offset by an increase in 2015 when skinny packages offering greater choice became prevalent.

And then there is Dave Morgan, chief executive of Simulmedia. He points out that the popular Judge Judy TV show draws more total audience advertising minutes than all YouTube videos combined. It’s unclear if Judge Judy is popular among millennials.

Like so many facets of our economy, technology has radically changed the way we consume media. Right now advertisers are desperate to find ways to attract younger people that do not involve becoming beholden to new media behemoths Facebook and Google.

Hulu, with its traditional roots and new live format, might be their last, best hope. To play along, your best bet would probably be shares of Comcast.

If you're not getting our thrice-weekly email updates, fill in the form below: