At a conference called the Internet of Things World, held in Santa Clara, Calif. this month, many of the world’s leading tech firms will explain how sensors, analytics and cloud computing will change everything.

Recently it has become convention to dismiss the Internet of Things. Pundits point to the troubles at Google’s Nest, the lack of open standards among thecompeting connected-home platforms and the absurd notion the masses are clamoring for connected toasters and wine bottles as proof the IOT is all sizzle and no steak. The pundits are wrong. They’re missing the paradigm shift the IOT represents because they’re too focused on the machines.

Behind the devices of the IOT is a whirlwind of new ideas and possibilities as ubiquitous sensors, real time analytics and powerful cloud computing intersect. It’s about collecting and leveraging vast amounts of data in real time, and it will touch every sector, every industry. That’s why leading analysts and technology firms have converged at the Santa Clara Convention Center.

BMW (BMW) and Ford (F) expect connected cars will communicate with each other and the network, relaying key data points like speed and destination. Using that data, the network will not only route traffic and govern speed to relieve congestion, but it will also reduce accidents by constantly monitoring safe distances given weather and road conditions. In the nearer future, smart-assist features like automatic braking will use data from onboard sensors to slow the vehicle to avoid accidents even if the driver fails to reduce speed.

Johnson Controls (JCI) wants to take that one step further with embedded sensors in roads, street lamps, traffic lights, buildings and other infrastructure. It will collect all of that data, analyze and make it useful so lights and air-conditioning units shut off in empty offices and so traffic lights change to moderate the flow of vehicles. In icy road conditions, the cars will be alerted to slow down. And if the drivers fail to slow, the cars will automatically reduce speed.

The initial winners of the IOT paradigm shift are the makers of sensors, data analytics software and the cloud-computing supply chain. 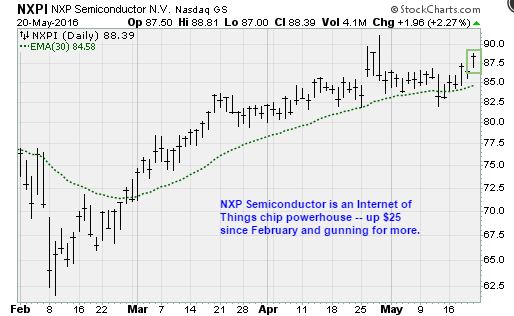 STMicroelectronics (STM), Honeywell (HON) and NXP Semiconductor (NXPI) make many of the motion and pressure sensors found in infrastructure construction. Mobileye (MBLY) is a leading maker of image sensors for self-driving cars. Auto parts maker Bosch continues to lead innovation in the sector with several driver-assisted systems for braking and cruise control.

Intel (INTC) moved aggressively into IOT sensors for wearable devices with its Curie line of button-sized chips, and it’s also developing powerful chipsets for the cloud-computing supply chain currently dominated by Amazon Web Services (AMZN), Microsoft (MSFT) and Alphabet (GOOG). Finally, IBM (IBM) is building a major presence in data analytics – particularly in healthcare – with its Watson computing platform. There will be secondary winners too. As the paradigm shift continues, old business models will be upended leading to new services, products and industries.

Skeptics are wrong about the IOT because their focus is the things, the machines. The power and promise is in leveraging data. Sensors and real-time analytics mean we’re entering an era where reaction times will be smaller than at any time in history. Businesses will have the ability to predict and remedy potential problems. That’s going to lead to unprecedented control over resources. That’s how the Internet of Things changes everything.