For mobile users the Internet is slow and tedious. Two of the biggest companies have a fix if content providers are willing to get on board with fragmentation.

In August Google announced its Accelerated Mobile Pages program would move from a special developer’s preview version to all mobile pages. AMP is a radical reinvention of the mobile Internet. Pages written fr AMP are stripped of all of the bits that make them slow-loading, then they are cached on Google’s enormous collection of region specific servers.

For users, the result is magic. Pages load lightning fast. And that is the bet Google is making. It wants to give users a taste of how good the mobile Internet can be when it takes control of all of the stuff behind the scenes.

If all of this sounds familiar that’s because Facebook (FB) followed the same game plan with its Instant Articles program. In surveys, it found users were continually miffed by how slowly pages from their favorite content providers loaded. Facebook’s solution was to have content providers code pages specifically for Facebook servers. Because they lived inside the network and were stripped of the stuff that made them slow as molasses on the Internet, the result was a much better experience. Users loved the new pages. Content providers, increasingly dependent on Facebook for traffic, were in a tough spot. They had to oblige.

Then Facebook decided it would change its Newsfeed algorithm to include more posts from friends and family. While it’s hard to fault a social media site for getting more social, content providers bristled at the idea of seeing their own contributions shrink – especially when most had committed significant resources to Instant Articles.

AMP is forcing their hand again. It means another set of development costs on top of web, mobile applications for two platforms and Instant Articles. It also means ceding more control to Google. 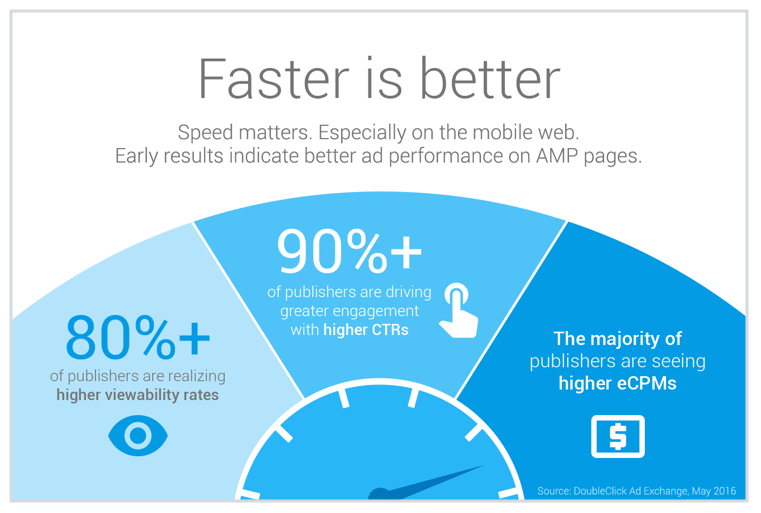 All of this comes at a time when Facebook and Google already command more than 64% of all digital media spend and more important, 90% of all new ad spend. They’re already big and getting bigger. Now they’re bullying content providers into further commitments or risk forfeiting exposure to their massive audiences.

In many ways this is business as usual. Facebook and Google won the standard-based, open web by building services users freely chose over all others. Now they’re pressing their business models to monetize that outcome while pushing content providers and advertisers toward a fragmented mobile web. Facebook recently reported year over year mobile revenue growth of 81% to $5.42 billion. For its part, Google used strong mobile and video ad sales to post growth of more than 21% to $21.5 billion. From Facebook proper to Search and YouTube, the companies build the services where people spend time. It’s tough to make a compelling case that the status quo will change in the near future. It’s even tougher make the case the companies should not be rewarded for winning.

For Facebook and Google investors these are the best of times. They’re on the verge of extending their dominant brands by fragmenting the mobile web into self-serving standards. Ultimately content providers and advertisers will be forced to comply. There is no viable alternative. When this goes through, Facebook and Google will reap more pricing power and fatter profits.

I have been bullish on the prospects for both companies for a long time. I continue to recommend buying both stocks into weakness.